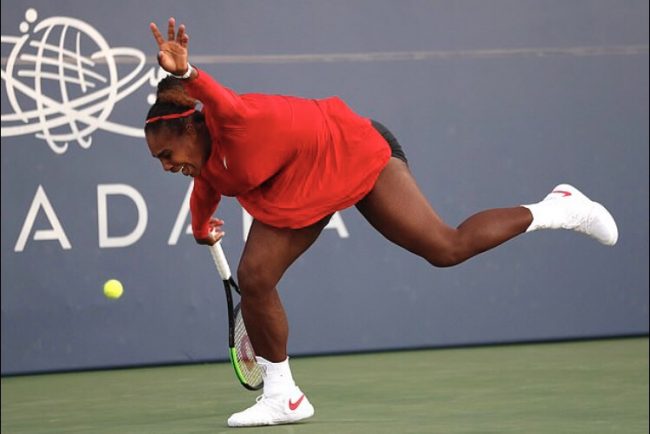 Tennis player Serena Williams as back at what she does best after being a mother for ten months.

Recently, Serena Williams announces that she won’t participate at the Rogers Cup in Montreal. She admitted suffering postpartum pregnancy pain. She might want to stay longer at home with her daughter.

During her last game, Serena Williams had a big loss again a young British player but she said she didn’t have time to complain about that lost. She lost 6-1, 6-0 against british player Jo Konta during the first round. The game took place at the Silicon Valley.

And it was entertaining to see her play so hard after giving birth for the first time. But was it a good choice? Was it the best moment to do her comeback? Does she have to keep playing as she has won almost everything when it comes to tennis?

Anyway, Serena Willians has to pulled out from Roland Garros 2018 in Paris because of injury. Then she came back stronger in London for the Wimbledon was 2018 and lost at the final. She really made a great comeback. Those hard training are big sacrifices and sometimes the body is not ready for it even if you mind is ready.

That’s May be what Serena Williams is going through. She might feel like she has to chose between her daughter and her tennis career. Last time she was complaining that she didn’t see her daughter first steps.

But you have to chose either you stay home with your kid and become a real house wife or your keep your job and then you have to find someone to take care of your kids.

Hoping Serena Williams what is better for her and her daughter. She is a mother now and will have to deal with it. Her daughter is important and if it take a lot on her she c just be a real house wife.