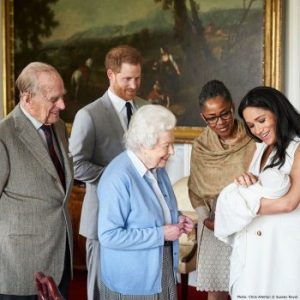 Meghan Markle and Prince Harry presented they royal baby Archie Harrison Mountbatten-Windsor,  born on Monday May 6th 2019 early in the morning, to the Queen Elisabeth and to the Duke of Edinburg. Archie comes from Harry’s father and Harrison is a popular name especially after celebrities like Harrison Ford and recently character movie Harrison of Star Wars. 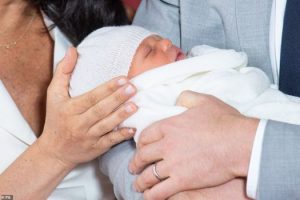 The duke and duchess of Sussex stood out public at the to present the baby. Meghan Markle wearing a white shirt dress with a belt and nude heels while Harry wore a grey tuxedo. The baby was wrapped up in white blanket. Harry was the one holding the baby. Here again Meghan and Harry broke the code as ususally it is the mother who carries the baby when the royal is presented to the whole world. All Prince William and Kate Middleton babies were hold by the mother. Late Lady Diana carried both William and Hary when she came out publicly. 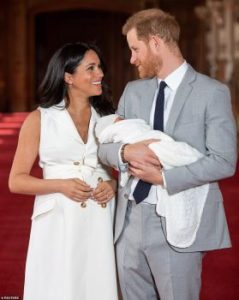 For a woman who just gave birth, Meghan Markle looks radiant and she is already paraing in heels. This is another lesson to women.

Meghan Markle and Prince Harry presented the baby to he happy grandparents including Meghan Markle’s mother. Her fater was no where to be seen on premises. This time, Meghan Markle hold her baby as she presented him to the Queen for the first public pictures.

The royal family is happy to welcome Archie Harrison Mountbatten-Windsor.

The Sussex couple did follow another royal by presenting the baby to the Queen first then to the press. But they did not pick the regular UK press. They preferred to use US broadcast instead of UK which raised critics againt them again. But people should get use to Meghan Markle and Prince Harry doing what ever they want. 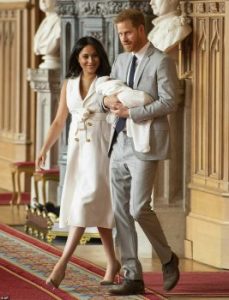 The Sussex couple got in touch with anchor TV from CBS Gayle King who is named as one of the 100 most influential people by Time Magazine.

Gayle King was invited and attend Meghan Markle baby shower party in New York months ago. She covered the special announcement through CBS. Last Monday, the news regarding Meghan Markle labor was not shared  by same expected media. Their secretary communicated an apology following this failure.

The name of the royal baby was really down low on the bookmakers list causing no money to win on this birth. Sorry for all the ones who were expected to win some money over  a child birth.

Congratulations to Meghan and Harry!