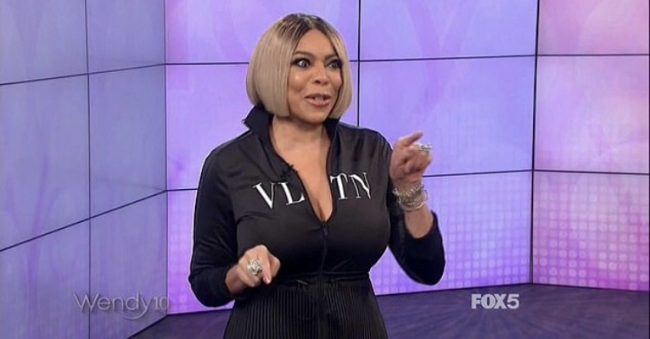 Wendy Williams is back and still has on ring on. She was looking well in a black outfit, flat shoes and blond bob hairstyle for her comeback after two months hiatus due to health issue as she said.

She intends to stay in couple with him. She kind of amid the cheating rumors but did not mention it. She counted her same old story for those who are used to listen to her stories about being married for twenty years.

She showed a picture of her back then when they met. The picture is 28 years old.

Wendy Williams amid she has to take off her show because of her health condition. She never mentioned the alleged mistress cheating rumor, the alleged beating which caused her arm broke back in December.

Wendy Williams was looking as healthy Wendy. Hopefully things are better for her. She thanks all of her guest hosts while she was off. She thanks the fans for showing love, for asking about her health status, for watching her show.

Her first guest was Tamar Braxton, one of the rare celebrity friend she has. Tamar was part of the Celebrity Big Brother season 2 on CBS with other celebrities including Kandi Burrus.

Last week, Wendy Williams was seen out groceries shopping after the studio while her husband headed to a different location.