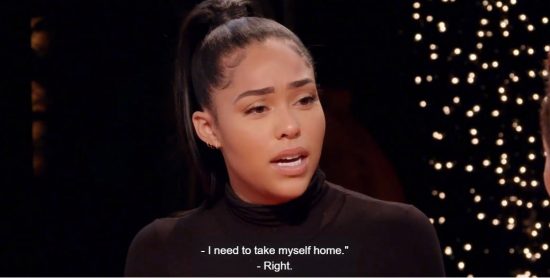 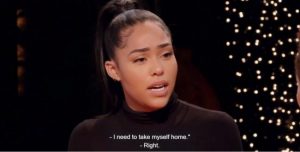 I am not here to play the victim.

The show started with a nice presentation by Jada Pinkett Smith of Jordyn Woods, the way she is linked to their family, the fact that she is part of their family. She started right from her childhood when she used to play with Jada and Will son Jaden to their middle school when she met Kylie Jenner and then them growing up and becoming women.

Will Smith who is currently fiming Bad Boys 3 couldn’t attend the show. Jada Facetimed Will. He was also nice to her.

Jada and her mother found the mother to explain that she will have to tell the story, to tell the truth because three are in pain right now, because of was it being told. She said she wanted Jordyn to tell her side of the story and let people decide and make their mind.

The decision of Jordyn Woods to go public was to give her side of the story. She went to Jada for help, she wanted to do the right. She followed Jada’s advice. Jordyn wanted to express her apology to the Kardashian and also tell the truth despite what is said about her.

Jada Pinkett Smith was certainly the great person to hold on to Jordyn Woods the way she did before and after the show.

Jordyn Woods confessed what happen the night before everything went bad between her and the Kardashians. 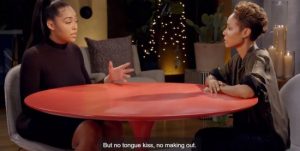 Jordyn sat at the red table with Jada. Jada started by saying that there is a family that feels betrayed by you. She didn’t precise it was the Kardashians. But we do understand and feel her empathy.

I want to give you the opportunity to tell the truth. Tell your side of the story.

What happen?
Jordyn started her story. She said she was out with some friends. Then they went to a club. She said young people in LA like to do after parties at home. So they went to Tristant’s place. She didn’t question herself. she just went. She was drinking, dancing, having a good time. Then she sat close to Tristan. From where she was sitting, it looks she was sitting on hi s lap. She said she didn’t doog any lap dance. She did not have his breast on him like it was said. She did not have her arm around his neck.
After some hesitation, Jordyn Woods said she should have gone straigth home after partying. She shouldn’t have gone to that house and  she wouldn’t have been sitting at the red table talk in this unconfortable situation.
Jordyn confessed that things seemed really crazy to her. She said that she understand why people were saying all of this on social media and to the media. She said “It was an innocent”.
Wiping off her tears, Jordyn Woods said:

It is so much history involved.

She said she wasn’t thinking right. She said she was drunk but did not have a blackout. On her way out, Tristan kissed. He kissed her on her lips, no tongue involved.
Were you chocked?
Jordyn Woods didn’t know how to act. It feels akwards after Tristan kissed her. She couldn’t think right. She try to convince (herself): No that didn’t happen.
She was shocked.
Why did he do that?
Jordyn Woods said she doesn’t know why Tristan went straight on her and kissed her.
After that, she went to her car where a driver was waiting. Then she went home, she went to Kylie’s home. As she left the party while the sun was rising, the girls were awake. She talked to Kylie and Khloe. She
She forgot that part of the story. Actually, she didn’t want to talk about that story to the sisters.
She wasn’t honest about the actions which took place there. Jordyn Woods only said that there were girls dancing around Tristan and so. She never mentionned her or Tristan being around each other.
Jordyn did not want to hurt Kylie. She said it will hurt her if she talk about the kiss so she did not want to talk about it. sShe said she is not a mean person. aid she wasn’t trying to protect Khloe. She said she didn’t want Khloe to suffer. She doesn’t want to be a homewracker. She doesn’t want to break her or her daughter. She has been around them for years, they are like family to her and she did not want to cause them any pain.
Do you feel you are the reason the two are not together?
The answer is no. Jordyn went straight and said no. No she is not the reason Khloe Kardashian and Tristan Thompson.
Did you sleep with Tristan?
The answer is no. Hell no.
She is willing to take a test, any kind of test to prove that she is not  lying. She wants to prove to the Kardashians that she is not telling the truth. She has no relationship with Tristan. No plan on meeting up. No conversation. No ongoing relationship on any kind with him.
She doesn’t want to heart anyone. She has to deal with her family. She has to deal with people who are hurt because of this. She said everything went out of control when it went public.
The media the way it circulated. It’s all about a betrayal of a black woman. No venue for of the doubt. Jada Pinkett Smith share some story of her when she was young and how she felt about being black in Hollywood.
Jada pursued saying “We all make mistakes”.
Jada explained that Jordyn needed an opportunity to tell her side of the story. This is the purpose of the Red Talk Table of today. This is what the work does.
Jordyn jumped in saying that she didn’t eat for days, she didn’t look at her phone for days. She was trying to find a sleep. Every time she woke thinking it was a bad dream but it wasn’t. It was real.
Their family is destroyed. (Talking about the Kardashian’s)
Jordyn said that she doesn’t want to play the victim.  But everything around her is so screwed. Her family is bad,. They all feel bad. Her sister can’t go to school, her mum can’t go to the groceries, her brother can’t go to work. She said people were so mean saying that her father deserved to die.
What will you do different?
Jordyn said she would have go straight to Kylie and Khloe and tell her the truth after quiting Tristan Thompson.
She realized that she should have assumed what happened. And she won’t have been in the situation she is today.
Jordyn gets all the compassion of Jada.
She talked to Kylie. She told her that she was going to talk to Jada. She wants them to have peace, peace of mind. This is something really hard, hard to swallow said Jada.
Jada completed her thought by saying that she should let people feel safe with her, let them take their time to heel, to grieve.
Is this a publicity stunt?
Unfortunately not. This is real life.
Did you apologize to Khloe?
I did. By phone, text messages.  Jordyn responded. Adding, until she will have the possibility to tell Khloe Kardashian facze to face that she is sorry.
Jada had kind words to Jordyn, she said people need time to heal when the feel betrayed, when they are hurt to recver, to trust again, to trust back. She let Jordyn know that it will take time, she will have to be patient.
She won’t clap back, she won’t attack. This is real life. 90% of these people were not her friends.
She said she is happy, she feels free. She says it feels good to tell the truth. 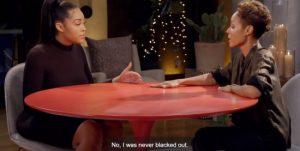 Jordyn Woods said she is willing to take lie detective, to do whatever it takes to prove that she is telling the truth and she has never hooked up with Tristan Thompson. He kissed her, on her lips, no tongues. Just a kiss.
She really did a great job.

Kind words of Jada were: “Love”, “kindness”. Give support to Jordyn.