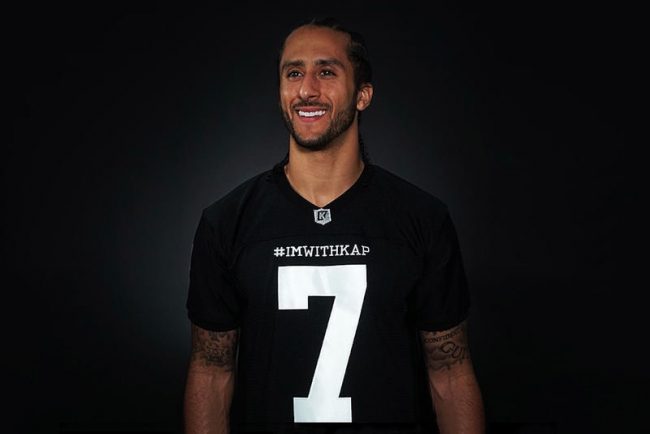 Is out NFL. He is doing a lot for his community.

Colin Kaepernick actions have led him not finding any NFL club. The 31 years old man has decided to take his fight from the court to a real court with public judging.

Colin Kaepernick decided to file a formal and official complain after being evicted of the ball for several months. The former San Francisco 49ers quarterback Colin Kaepernick has a collusion grievance against the NFL.

He wants to fight the NFL

The ex San Francisco 49ers quarterback initiated the movement by going down his knee as a protection sign during the National Anthem. He wanted to protest against racial injustice in America.

The root of all this…

Everything started with the violence against African American.

Before the NFL quarterback player Colin Kaepernick protested in 2016 by putting his knee down during the national anthem. Colin said he exactly knew what would happen after his physical sign of protestation:

I knew the consequences of what could come from this.

I was prepared for that.

After all of this, Colin Kaepernick received support everywhere. As he is fighting for civil rights, some NFL players and other civil rights activists joined the movement. So do some celebrities. He was then blackcalled by the NFL.

Of course, actual US President is totally against this movement. He is a conservative so do NFL people, and Super Bowl people.

His actions are paying. Many celebrities join the cause.

This year, the contestation continues with the Super Bowl boycott. It took place in Atlanta. And it was not the best one.

Back to the NFL, these last months, Colin Kaepernick and his representatives opened discussions with NFL representatives. They want to solve the pending grievances. Everything is so confidential regarding this subject. They have an agreement from each party to keep everything secret.

We are not privy to the details of the settlement, but support the decision by the players and their counsel.

We continuously supported Colin and Eric from the start of their protests, participated with their lawyers throughout their legal proceedings and were prepared to participate in the upcoming trial in pursuit of both truth and justice for what we believe the NFL and its clubs did to them.

We are glad that Eric has earned a job and a new contract, and we continue to hope that Colin gets his opportunity as well.

Meanwhile, Nike presented a new limited edition football jerseys for the ex San Francisco 49ers player Colin Kaepernick couple of days ago. The shirt was sold for 150 dollars, it featured 7 on front and back, which was Colin Kaepernick’s. Nike representatives said they wanted to celebrate the civil rights fighters.

The Nike Kaepernick Icon Jersey is out of stock!

Thank you to everyone that took the time out of their day to pick one up.

I am humbled and appreciate all your continued support.

Colin Kaepernick gained many support from many celebrities. Some of them showed their support by posting a picture of them with the famous sold out black Jersey.

Singer Jhene Aiko and Nessa were among the others to share a pictures of them on their social media.