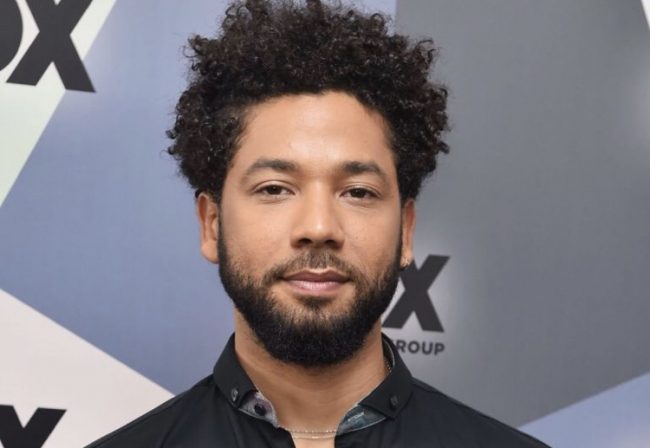 Empire Jussie Smollett went too far. He staged the hate attack by paying two Nigerian brothers to attack him and act like he was attack by racist and homophobic men.

Couple of week ago, a picture of Jussie Smollett surfaced on internet with a bleeding nose but nothing broke like he said. During one of the coldest night in Chicago, Jussie Smollett said he. Ent out to grab a Subway sandwich. But this was a fake story. He was not getting a sandwich, he went out to get beaten. He even rehearsed the attack with the brothers the day before.

The story is a big thing, it looks like Jussie Smollett was about to play his Empire role. He said he called his boss Lee Daniel who advices him to call the cops to report the attack. Why?

Why setting up something so big, involve the authority, saying that you are the gay Tupac. He is said to be a narcissist person. He is already earning a lot of money, but not satisfied. Rich people like him are never satisfied. He is greedy.

Some people ate saying that Jussie was about to get out of Empire, that he was mad at his payroll, that he is being used by some men for political reasons, he accused his attackers to have said “Make America Great Again” (Donald Trump’s slogan), that he was not enjoying his singing career because he is not really selling albums from Empire, that he and Lee Daniel were on something, …

Jussie Smollett has the support of his family, his friends, of many celebrities back then when he posted the picture of him with bleeding nose. One celebrities like Joe Budden didn’t buy the story. Guess he was right from the beginning.

There are many stories out there and we don’t event know what to believe. True is the brothers got paid 3500$ and were told that they should cool off, go to Nigeria May be and then later on they will get the other 500$.

Jussie Smollett ensured them nothing will happen to them. They trusted him that’s why they accepted the deal and because they needed money. But things went out of control when Jussie Smollett spell it out to the police probably to play the victim, unknowing that the police officers will do their job and investigate.

It was also said that Jussie Smollet received a letter with homophobic at his FOX office but no attention was paid to that piece of paper which push him far some must said.

But Jussie Smollet really went il far, because this time, he has been arrested, he fake an attack, a race attack, a hate attack. He had the support of many persons, but with this story, he will definitely be by himself. If you want to stand for something, a cause, this is not what you should do. He was absolutely wrong to behave this way.

This will be hard for the LGBT community because people might not believe them when they will be calling for help against racist attackers or homophobic attackers. Same for the black people, thanks to Jussie Smollett.

As Jussie Smollett is unhappy with his Empire checks, he will now face jail. He paid 100000$ to stay out of jail for the moment and has to give his passport and was ordered not to leave the premises. The man won’t be part of the Empire cast for sure as he as not happy with the check , FOX will probably terminate his contract because of his behavior.

As Jussie Smollett indirectly attacked the President, Donald Trump fights back after the pu luc announcement on the media everywhere,

This was my favorite character of Empire. What is going to happen now? I guess Cookie Lyon will lose a son? The show must continue! So does Jussie Smollet hot topic. The TV serie will return in March 2019. There is no information about any renewal or cancellation of Empire by FOX.

Jussie Smollett is getting paid 65000$ per episode. He has already played more than 40 episodes so he should be seating on top of 2,6 millions dollars.

Currently, Empire is on its fifth season since last fall. The TV serie is suffering ratings declines. The season 5 is watched by less viewers than season 4. We don’t know yet how this Jussie Smollet fake attack will impact the ratings. Empire remains the second highest rated drama of FOX.

He puts himself under fire and now he got burned. I don’t know if this is what he was looking for, if he wanted to do headline, here he is, doing headlines. Everyone is talking about him from CNN to BBC News, Dailymail, The Washington Post, CBS News, Vulture, Variety, bloggers, Youtubers, Twitter…

The Chicago Police Department gave a press conference saying that Empire actor took advantage of the pain and anger of racism in order to promote his career. He is accused of making false report to the police about a hate crime. For the police this is just despicable and unacceptable.

Jussie Smollett is also accused of the fake letter. Actually he also fake the letter he received days before the attack. He sent to himself a threatening racist and homophobic letter at the Fox Studio.

Jussie Smollett Empire episode title Drop the Mic was planned to air on March 6th, 2019. Empire viewers won’t see this episode because they want to give an audience to a person with such a behavior.

We understand the seriousness of this matter and we respect the legal process. We are evaluating the situation and we are considering our options.