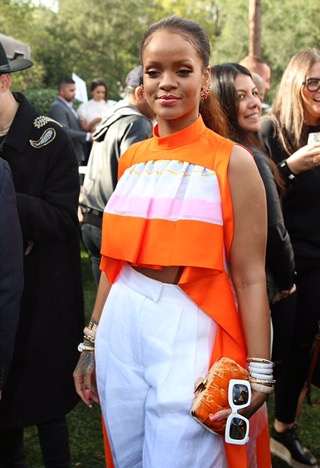 The beautiful singer has been working on many projects since she separated from rapper on and off boyfriend Drake.

Since the rumor Drake and Jlo we’re an item, Rihanna kept low profile.

Rihanna is the new cover of Bazaar Magazine. She covers their 150th edition and celebrated with them in an inspiring photo shoot theme close to the aviation because she was seen wearing hélices like a helicopter. She posed like a pilot too!

Rihanna is one of the face of Dior and has been promoting their new Spring Summer 2017 collection at the Paris Fashion Week.

Rihanna is part of the Ocean 8 movie cast. She has been seen many times on the set with faux dreadlocks and a Bob Marley reggae style.

She has her PUMA collection going on, her perfume KISS by Rihanna available at MaCy’s and her Clara Lionel Foubdation she supports and she has more to celebrate about her music career.

Rihanna recently celebrated the anniversary of her album ANTI. She posted photos of her working on the studio. She extends her records as she became one of the most played singers on radio especially with her song Love On The Brain. She is the top played artist followed by Mariah Carey and Lil Wayne. Drake comes at the fourth place.

Many of her songs have been platinum including those from ANTI album. Sex With Me, Love On The Brain are platinum!
And if you have enough of Rihanna, it’s too bad for you because she is nominated for the iHeart Music Awards. She has 9 nominations!

Other celebrities attend the party. It was the case for Nick Jonas who took a picture with the boss himself Jay Z. Also singers like Demi Lovato, Jaden Smith were there.

Rappers DJ Khaled and Fat Joe were there too.